Engineering olympians step up to the podium

Competitors are more likely to wield a welding torch than an Olympic torch, but rivalry was no less fierce at the 21st annual Komatsu Technology Olympics.

Komatsu UK employees competed against suppliers, and each other as well as some employees from across Europe in a host of events at the firm’s Birtley plant, with winners getting the chance to go on to compete in Japan.

A total of 151 competitors took part in the games, designed to not only showcase the high level of skill required to create the firm’s world-famous excavators, but also to generate friendly rivalry and team spirit across the company.

It is also a fantastic way to start 2019, given the successful 12-months enjoyed by the company in 2018, with around 2,000 machines produced and 100 new recruits signed up. Komatsu UK, which now employs around 475 people, produces between 10 and 12 machines every day.The competition may not boast the high-profile glamour of Rio 2016, but with sparks flying from welding booths, perfect finishes in the paint shop and excavator handling excellence in action, the crowds were treated to masterclass displays.

Komatsu UK Assembly and Paint Production Manager, Gary Yeaman, organised this year’s event. He said: “Nothing creates a buzz across the plant like the Technology Olympics. It is something that is really embraced by everyone at Komatsu.

“The competition is always intense, but good-natured – overseen by a judging panel of experienced employees. And it isn’t just about who can finish first - competitors are marked for safety as well as speed and also who delivers the highest quality work.

“The Olympics is a great way to demonstrate the ability of our workforce, create healthy competition and embed Komatsu’s drive to always improve. It’s also fantastic to welcome colleagues from overseas, with Komatsu plants in Germany, Italy and Sweden all represented in the contest.

"Guests included representatives from local schools, colleges, universities, Engineering UK and the RFCA, as well as a number of our suppliers. Hopefully, people will leave here inspired by the effort, skill and undoubted talent on display across our workforce and we’ll manage to capture the imagination of some young people who might be future Komatsu recruits.”

Preparation and training for the contest started at the turn of the year, and the actual competition takes place over a fortnight.

However, attendees of the final day were treated to front row seats in the Assembly, Painting, Welding and Performance Inspection elements.

As well as staff from Komatsu UK, there were also competitors participating from some of the firm’s supply chain partners including, Hydram, Curl, Gate7, KAB Seating, Aldridge, Hydram and Cummins.

But it was Komatsu UK that took home the trophies, with Jack Winlow claiming the assembly title, Jack Straughan the Inspection, David Valley winning Paint and Marc Elliott the Welding. 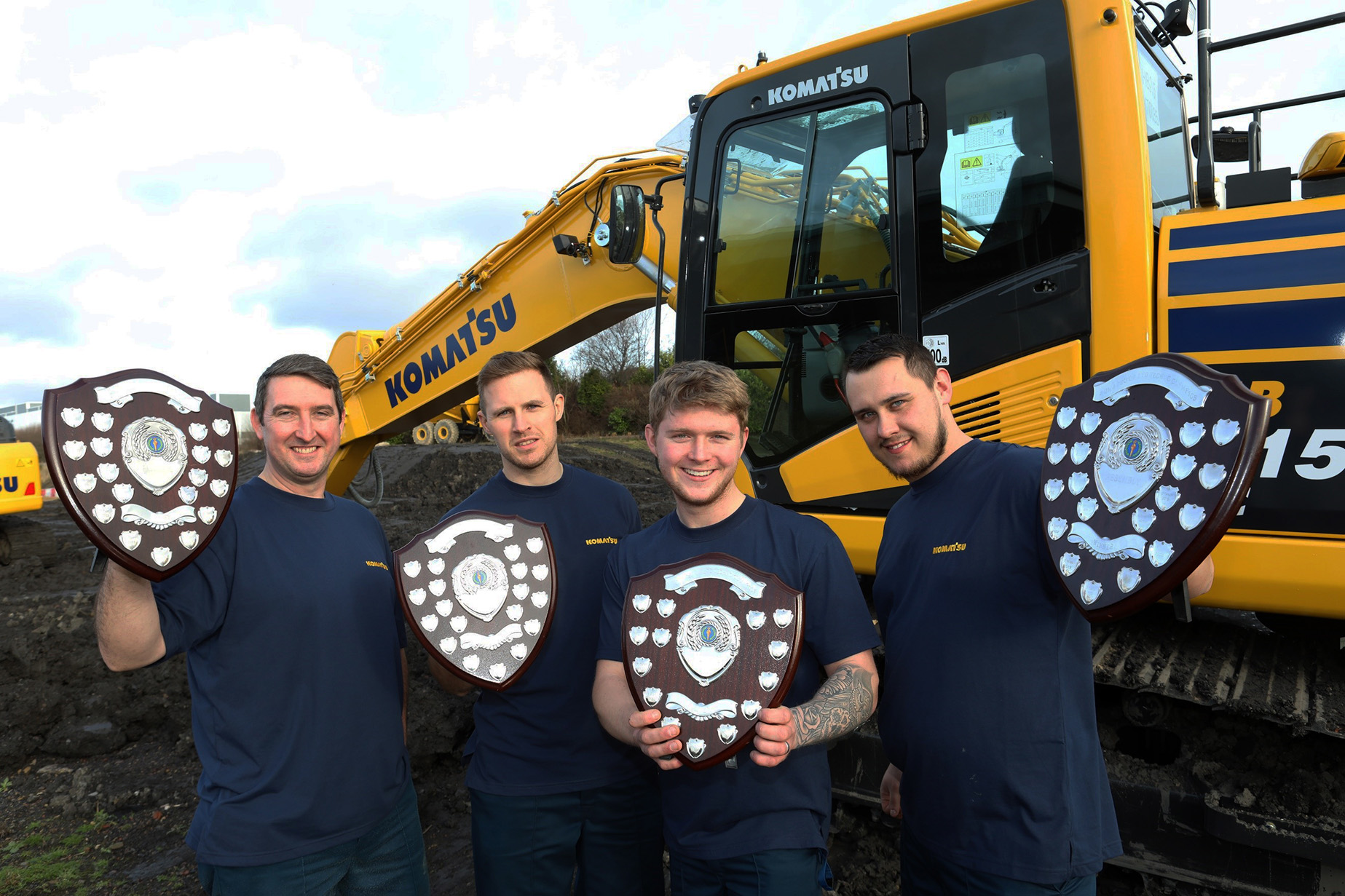 From left to right, David Valley from Paint, Marc Elliott from Welding, Jack Straughan from Inspection and Jack Winlow from Assembly.

The winners will now go on to represent Komatsu UK at the global finals of the Technology Olympics, in Japan, later in the year.

Marc, of Houghton-le-Spring, won the welding contest for the second year running. He said: “It’s fantastic to win and one of the bonuses for me is the interesting way it helps improve my knowledge of certain areas, which then enables me to pass it along the team.”

Jack Winlow, of Stanley, said: “This is my first win and it’s great after coming a close second last year. The competition really brings out the best in us, but also helps us focus on the quality of the work we do and how that is the most important element, rather than speed.”

His views were echoed by Jack Straughan of Lamesley, a former Komatsu apprentice, who added: “There is a really healthy competition between the competitors, but you know that if you don’t bring that quality then you’re not going to win.”

David, of Greenside, said: “People compete for different reasons – to test their skill under pressure, for the love of the competition or to maybe gauge themselves against colleagues, but everyone in the paint shop loves it and we really enjoy the friendly rivalry.”

Paul Blanchard, Komatsu UK Manufacturing Director, said: “This year we had the most competitors ever, the most Komatsu plants taking part and attracted one of the largest crowds of invitees, which is fantastic.

“Each year, we think the quality on show can’t get any better and each year, it goes up a notch. I’d like to congratulate the four winners, commend the runners-up and thank every person who competed and those who helped organise it because this was one of the best Komatsu Technology Olympics we’ve ever had.” 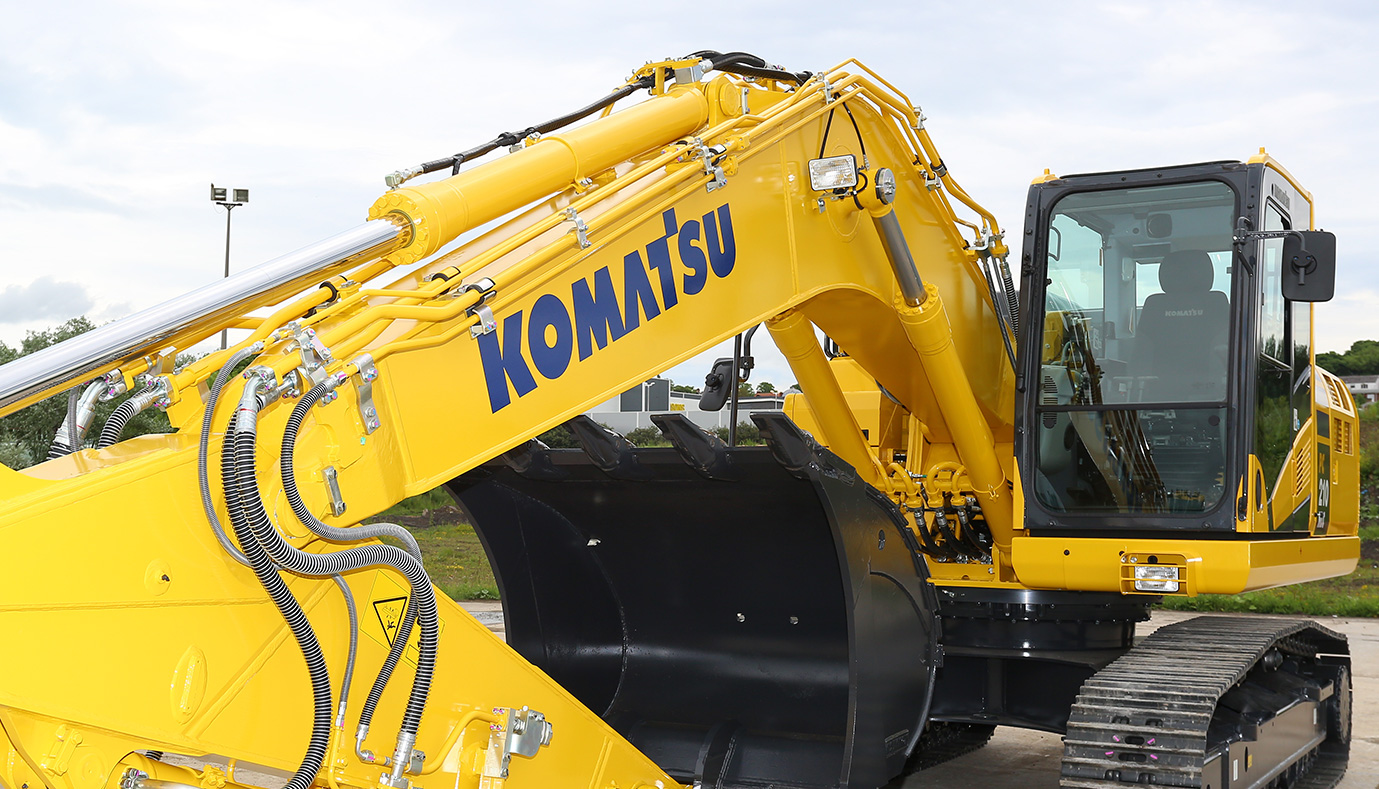