Komatsu has celebrated a landmark birthday with a new community floral arrangement for the front of its North East factory.

The yellow goods manufacturer celebrated the global company’s 100th anniversary by planting ten Japanese cherry blossom trees and a beautiful floral display at the entrance to the Birtley site.

The display and trees were grown and planted by Sunderland Home Grown, a community interest company (CIC) specialising in creating opportunities for adults with learning disabilities and mental health issues, offering training and employment via therapeutic horticulture activities.

Paul said: “It’s a great way to celebrate our company’s 100th anniversary. I’m really pleased with the display and the trees, which each represent a decade of Komatsu operations and will look fantastic when they mature and bloom. Sunderland Home Grown has done an exceptional job and I’d like to thank them for all of their hard work over the last few weeks.

“Komatsu UK has been part of the community in Birtley and Gateshead for over three decades, but we’re just a small part of the Komatsu global network. As good neighbours and a responsible employer, we wanted to make sure that we gave something back to the area as the company reached this amazing milestone.”

As well as the tree planting and floral display, 19 Komatsu volunteers collected over 100 bags of rubbish in a litter-pick around the borders of the Birtley site. The garbage removed filled four skips in four hours. The company has also handed out over 700 collection bags to staff, for community environmental projects in their own neighbourhoods.

Gary Hillery said: “This was a really good project. It’s good to feel like we’re starting to get back to normal too - with the COVID pandemic, hitting last year, we had to shut down for a short while, but we had people calling to ask us to reopen as it was so important for them and their relatives’ mental health. So, we did on a rota system to help adhere to safety guidelines.

“But it’s great to have projects like this returning and credit to Marcus and Daniel, who worked really hard to get everything done in time for the official launch of the planted area.”

Wishing Komatsu happy anniversary, Councillor Martin Gannon, Leader of Gateshead Council, outlined the importance of Komatsu to the local economy. He said: “Komatsu has been part of the fabric of Gateshead for over 30 years now, so it’s an absolute pleasure to be invited here today to mark this milestone birthday.

“Komatsu is such an important provider of high-skilled employment. If you work here, you’re getting excellent training from a great employer – hopefully we will be helping them celebrate landmark anniversaries for many years to come.”

Komatsu began life as “Komatsu Iron Works”, named after the city of Komatsu, to make industrial tools for the parent mining company, near Tokyo. It eventually grew large enough to sell to the public and began trading separately in 1921 as Komatsu Ltd, founded by Meitaro Takeuchi. The company produced its first tractor prototype in 1931producing more machines throughout the 30s, before moving on to bulldozers and tanks.

Worldwide, Komatsu Group now consists of Komatsu Ltd. and 258 other companies. It employs around 70,000 people and is the world's second largest manufacturer of construction and mining equipment.

Komatsu UK has delivered the highest quality excavators since establishing the Birtley plant in 1987, when it helped redefine modern manufacturing in the North East, establishing a range of Japanese practices and ways of working unheard of in most UK plants.

Originally creating 250 high quality manufacturing and engineering roles, Komatsu was at the forefront of the creation of a whole new industry in the North East that centered around automotive and construction equipment manufacturing.

Over 30 years later, the firm remains at the forefront of manufacturing excellence and this is testament to the company’s reputation as an excellent employer. For more information on Komatsu UK, visit www.komatsu.co.uk 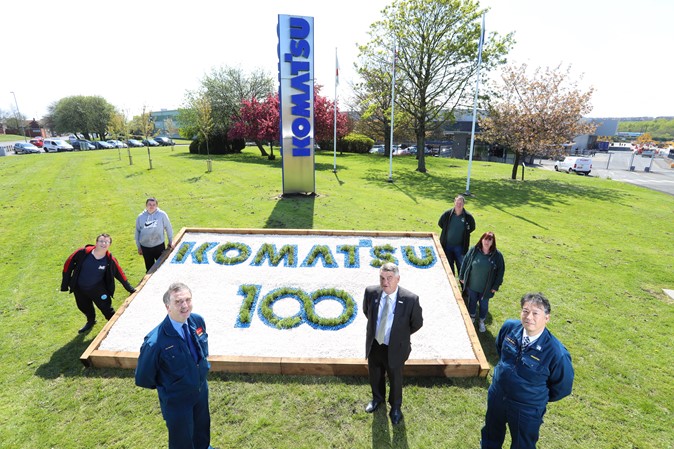